If you’re a landlord or property owner in an urban area wondering whether it’s time for a valuation, there’s potentially encouraging news from the Office for National Statistics this week. A new survey has revealed that close proximity to a publically accessible urban green space, such as a park, garden or playing field, can push up the value of a property by an average of £2,500.

How much does green space increase a property’s value by?

According to the study, homes within 100 metres of such a space are worth an average of 1.1% more than they would be if they were more than 500 metres away. The ONS compared data from over one million property sales in England and Wales, between 2009 and 2016, in order to determine how much homebuyers value green spaces.

Combining this with Open Greenspace data from Ordnance Survey, which is comprised of maps and aerial imagery, it was found that the closer a property is to a green space – and the more green space there is – the higher the premium.

What kinds of green spaces have an impact on property value?

The ONS data takes into account public parks and gardens, play spaces and playing fields. Sports facilities such as golf courses and community growing spaces such as allotments, as well as religious grounds and cemeteries, are also included in the data.

However, other spaces people might use for recreation, such as heaths or woodlands, are not included – but this does not necessarily mean that there is no correlation between a property’s closeness to one of these types of space and its value.

Can other factors decrease the impact of a green space on a property’s value?

In order to account for their inevitable influence, several other factors are included in the ONS data, including:

Does the type of property affect whether green spaces impact its value?

Detached houses benefit much more from the boost in value provided by nearby green spaces. Those within 100 metres of a green space see their value increase by up to 1.9%, compared with flats at the same distance, which see their value go up by only 0.6% on average.

Comparatively, semi-detached houses (1.6%), bungalows (1.5%) and terraced properties (1.4%) all enjoy a significantly higher boost in value, when located within 100 metres of a green space, than that of a flat. 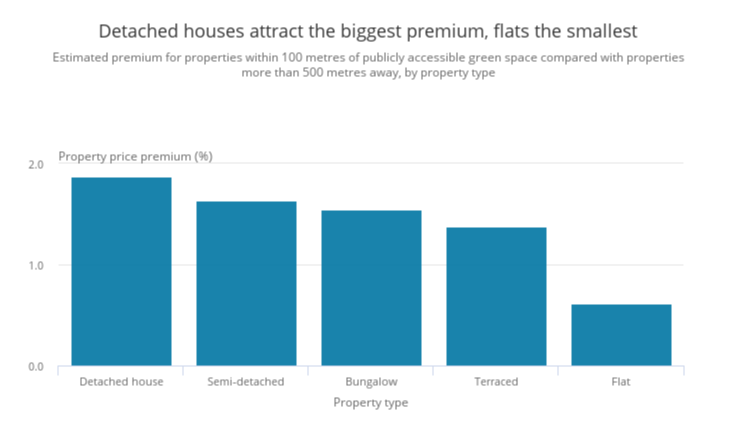 Does living within sight of a green space increase a property’s value any further?

While homebuyers value proximity to a green space, it seems that they value even more the ability to look at one from their window. The ONS survey used property descriptions containing words such as “outlook”, “views” and “surrounded” to determine that, on average, properties with a view can expect a boost in value of around 1.8%.

This view could either be over a green space or over water, such as rivers, canals, lakes or the sea.

You can either book a professional appointment or use our online valuation tool. For more information, contact our team of experts today.